The closely-fought US presidential election appeared to be headed into an uncertain phase with Republican incumbent Donald Trump and his Democratic challenger Joe Biden fighting it out in the key battleground states. While all the eyes were set on the tight race for the White House, Bollywood turned Hollywood actress Priyanka Chopra also shared her experience. Taking to social media, she shared how she closely followed all the updates related to the US elections along with her family.

Taking to her Instagram stories she shared her thoughts with her fans amid the counting of votes and wrote: “The uncertainty of 2020 continues. Watching the US Elections with my family in LA. Many votes still uncounted… it looks like it’s going to be a long night.” 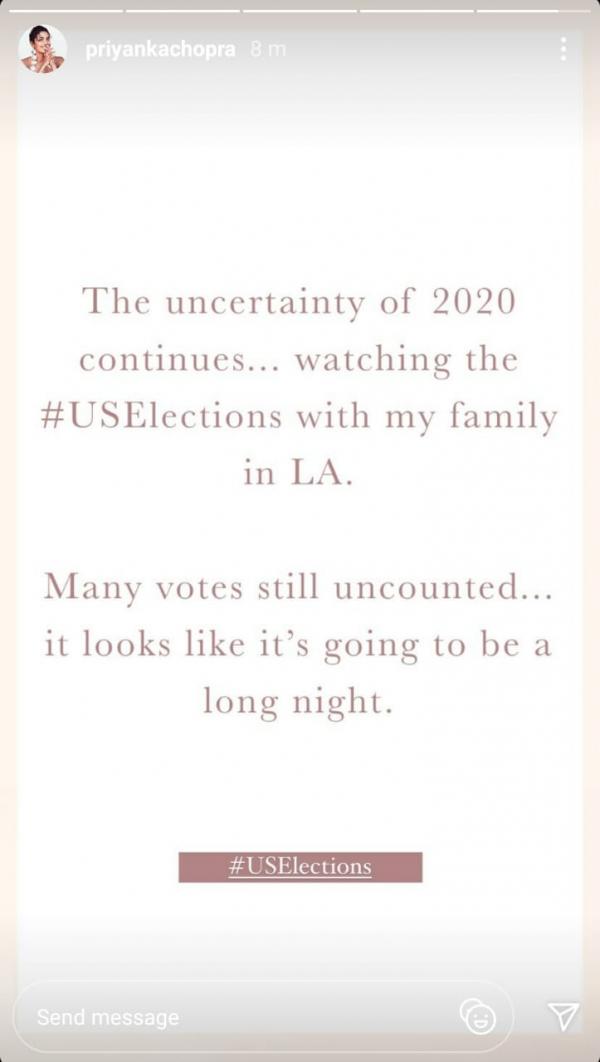 PeeCee also celebrated 20 years of her Miss World pageant 2000 win and subsequent entry into films. Priyanka to her official Facebook Page to share a nostalgic post about her pageant win, and entry into a “magical world”. She used the hashtag #20in2020. She shared a video collage of clips from her early films and her Miss World pageant win. In her post, Priyanka mentioned her Tamil debut film “Thamizhan”, and first Hindi films “The Hero: Love Story Of A Spy” and “Andaaz”, both of which released in 2003.

“Back to where it all started #20in2020. Seems like another lifetime now… back when it all started and I fell in love with the movies. Being in Indian movies was like entering a magical world.. I went in blind, with no idea what to expect and no formal training. It’s been a rollercoaster ride of challenges and milestones with so much I’ve learned since and so many incredible people I met along the way. I’d like to thank everyone who took a chance on me at the beginning. These 3 movies set me up on a trajectory I would never have expected,” the actress wrote in her Facebook post.

“Can’t agree more lala paaji #LaraDuttaBhupathi… We were such kaccha papads (novices)! Thank you for your beautiful words… you are as gracious and kind as the first day we met,” she wrote in a special post to Lara, her co-star in “Andaaz”.

Priyanka will next be seen in the film adaptation of “The White Tiger”, which she has also executive produced, and “We Can Be Heroes”, directed by Robert Rodriguez. She is currently developing an untitled comedy with Mindy Kaling and Dan Goor, and also working on Russo Brothers’ “Citadel” and “The Matrix 4”.

For all latest news and updates, stay tuned to our Facebook page